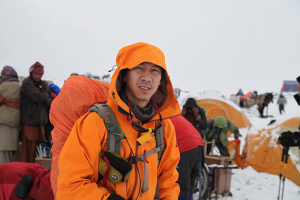 Jamling is a close friend and an icon in Singapore mountaineering circles having been involved in all three Singaporean attempts on K2 in 2008, 2012 and 2014 (with 2 successful summits), as well as 7 of the Singaporean Everest expeditions, from both the North and the South side from 2007 to 2015 (with Mt. Everest successful summits). I was with him in 2010 on Everest, and again on K2 in 2014. We all know the risks inherent in mountaineering, and when I decided to climb K2 at short notice (with less than a month of notice), I knew that my chances of doing so safely would be greatly enhanced with Jamling at my side.

The respect and the friendship that he has built amongst our community here is testimony to his professionalism, mountaineering prowess, physical strength, but above all, deep humility and clarity of judgment. We’ve hosted him many times in Singapore, and whenever any new Singapore group plans to head off to the high mountains, the advice given above all else is – go look for Jamling! He communicates well and balances goal-accomplishment and safety.

I recall one episode on Everest, when I had come down with a severe bout of stomach upset and had thrown up all over the inside of my tent. It was extremely unpleasant, but Jamling gamely helped me rinse out all my gear in the pool without hesitation. By the time it came to the summit push, we were both in great shape and made it through the ice-fall at a very fast and sure pace; on the summit night, as we left high camp, we were confident enough to bypass the crowds on the fixed lines. The two months on the Everest expedition was made possible because of Jamling.

On K2, the weather and environment was challenging, especially with the risk of falling rocks and avalanche at the camps. At Camp 2, Jamling had scouted out a very safe tent-site shielded by a rock outcrop. Even though the tent hung half over the edge, it was well anchored and the best place to be in. In the end, that climb was a safe and successful one.

In the past few years, Jamling has taken on a greater role in managing and planning expeditions. Transitioning from being a guide to an expedition leader is challenging and requires skill sets beyond physical strength. It requires judgment, communications, detailed planning as well as strong leadership skills. Jamling has been able to develop and bring these skills to the fore to deliver safe and successful expeditions, building on his experience starting as a kitchen boy on expeditions to being a climbing Sherpa. Over the years I’ve known him, he has worked relentlessly to improve himself, acquiring the IFMGA qualification as well as developing other related skills of DSLR photography and improving his verbal communications.

I definitely recommend working with Jamling and Everquest expeditions for your future climbing needs.